Sunday, 12 June 2016, we, Jennifer Kamau and Lea Höppner from IWS, were part of a discussion organized by the „We are born free – Empowerment Radio“ in Berlin-Kreuzberg with the topic „Women Space is everywhere!“. Starting point of the discussion was the refugee-conference in Hamburg, February this year, where a group of women occupied the main podium to demand a direct visibility and representation of women and women’s demands on the conference. Next to us the activist LaToya Manly-Spain, Mai Shutta, Zari Harat, and Rajaa took part in the panel in Kreuzberg. This talk gave us the important opportunity to bring together the different perspectives on the action and the conference.

The action in Hamburg was organized quite spontaneously. The unity of the action was a result of the existing conditions of the conference. In the following text we describe the situation of the conference as we experienced it and what was our motivation behind our actions.

On arrival we found the huge area of Kampnagel with modern facilities, everything very organized, different workshop rooms, many people. We had a good feeling about the place. In the mobilization for the conference it was mentioned that the situation of refugee-women would be a topic, which would be specifically addressed in context of the current situation women are facing in the lagers, especially after the so called „refugee- crisis“. Our main interest was the women space and immediately after the registration we started searching for it, with no success.

The evening of our arrival begun with an introduction on the huge podium, where we were suffocated by male dominance. To be able to raise our voice, even for the introduction, we had to push our way to the front, and as if this was not enough, we had to physically grab the microphone to announce our presence. This was a first indication of more to come. 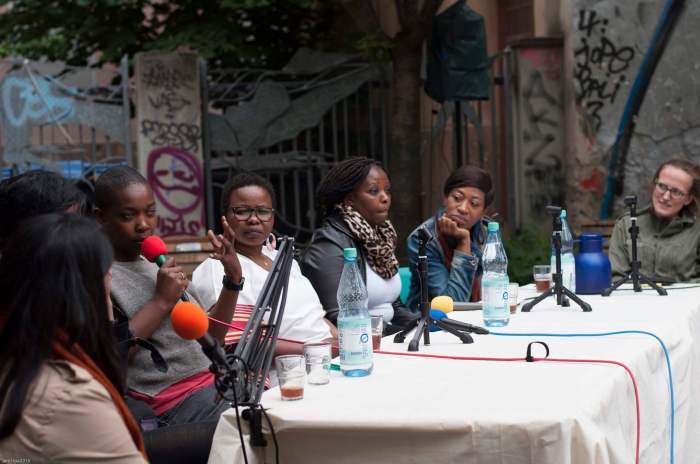 Next morning we continued our search to find the women space. The more we searched the more desperate we became. Finally at one corner at the end of the compound we saw some arrows pointing to the direction of where the women space supposedly was. Following the arrows, which went in a zig-zag-direction , we got to a very isolated container. First we past this because we thought it was a public toilet, not a women space, hidden away from the main conference. But it was the women space: a room decorated with many carpets to sit on and a little kitchen to fit to the women’s needs of cooking, chatting and giving massage to each other. There were no tools for having discussions, like a flip chart, a beamer or a table. A presentation was done by two women, one holding the laptop for the public to see some photos and the other woman speaking very loud, because there was no microphone. This was a big contrast to what we had seen in the main hall, very well equipped with beamers, microphones and translation gadgets.

Another dilemma we were facing was that important discussions we were having,  about women’s organizations or sexism, for example, were happening simultaneously to the discussions at the main podium, where the public attention clearly was. All of this was giving us an impression that women’s issues where not given preference in the conference. 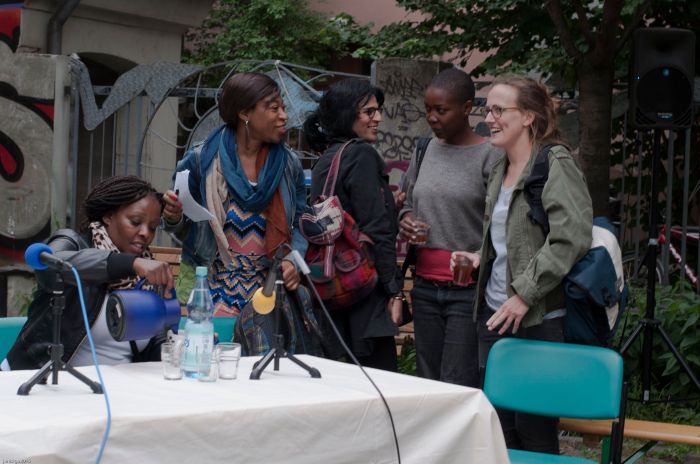 We don’t want to describe the whole scenario, but its the nitty gritty that added up and projected this discrimination we experienced as women. We felt something had to change, starting immediately, and the change had to be initiated by us women. It felt as if most women had the same impressions because the action didn’t take long to get started. It just needed the women to come together, express their anger and this was enough to ignite the action. The feeling that drove us was like the anger of a scorned woman.

When we went to the stage we claimed „Women space is everywhere!“ The demand behind this phrase is the struggle for more feminist spaces; for a more feminist society. As Angela Davis said when she came to Berlin: „You can’t fight racism, without fighting sexism!“ The roots are the same system, the same structure like behind any other form of discrimination. A structure, which is made so that human beings exploit each other, a structure which is tolerating the rape of women and transpersons all over the world, a system which is based on the logic of profit by exhausting the resources of the world, leading to war, torture and destruction. A system, which is separating people by race and class. A system which is creating capitalistic, individualistic societies without a glimpse of solidarity for each other. A dualistic system which is putting people into boxes of white and black, man and woman, ruler and slave.

The reaction of a lot of men (and unfortunately not only men) after our action – even after this discussion in Kreuzberg – was that we divide the struggle with our feminist ideas. The same accusations the feminists of the Black Panthers in the US got, when they where rising their voices against sexism within the movement. We got accused of loosing the focus – instead of fighting sexism, we should fight fortress Europe. We were seen as a bunch of insane feminists which are provoking conflict against men.

The right wing forces are on the rise all over the western world. Fences and walls are built between people everywhere, but especially around Europe. People coming here to try and escape the wars caused by wealthy west are damned to survive in lagers, where they also run the risk to die as a result of arson attacks in these camps. Racist attacks in Europe are accepted by a silent public. Europe is defending its wealth by letting people get killed by their weappons. In South America socialist projects are being substituted through parliament coups by conservative and imperialist forces. Turkey is rebuilding up a fascist neo-ottomanic empire, expanding the persecution on kurdish people with the support of Germany and Europe. Progressive, emancipated movements and forces fighting against fascism are criminalized as terrorists by the leaders of the world.

In times like these, where our societies tend to turn into an anti-emancipatory direction, we need answers to the question: In what kind of society do we actually want to live in? We can start by saying it again: certainly not in a patriarchical one.

We see our feminist struggle against racism, sexism and neoliberalism and any other forms of oppression as a way to find answers to this question. We tackle oppression, wherever we face it, wherever we witness it and we may be loud and inconvenient.

For an emancipated, feminist society based on solidarity without racism, sexism, classism and any other forms of opression.

Against lager, deportation and isolation!

Listen here to the talk for the Wearebornfree Radio Show.